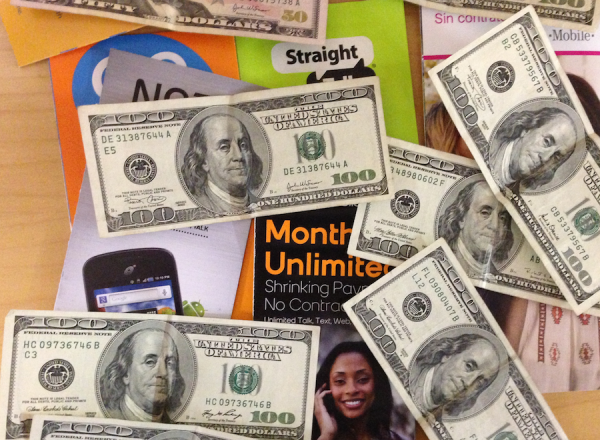 After some more research, I have a better idea of what I want to do. I thought about getting myself on Net10 $45/month plan and getting my boyfriend on a $30 100 minute/Unlimited Text and Data plan with T-Mobile. However, if he gets Android he really wants Jelly Bean, but is not comfortable spending a lot of money. It’s very hard to find that, also finding a cheap phone that has 4G (HSPA) abilities with T-Mobile’s network and is not expensive is difficult, as well. I decided that I would give him my iPhone 4S and I would get myself a Google Nexus 4. I have been wanting to try Android and I would like a new phone anyways. The great thing is (I have been an iPhone user for 4 years), if I hate the Nexus we can just switch phones (switch out SIMS of course). Since the iPhone doesn’t do well here on the T-Mobile network, I think we are both going to get on Net 10 AT&T. I did the math and the $30 (tmob) & $45 (net10)/month plans would only be $260 cheaper for 2 years than the $85/month net10 family plan (I would auto deduct for the discount, plus that plan after tax is only $11 more/month than what I am currently paying just for my AT&T iPhone service (Wow seriously… more people should go contract-less!!!) Anyways, I think it would be difficult to find his specifications for under $260… so it would not necessarily be worth it for him to purchase a new phone. Switching to the Net 10 Family plan would be a savings of $642.60 after 24 months (that buys a lot of stuff!)

I had to search for the SIM pack a bit. I went to a couple of Wal-Mart stores and found only CDMA SIMS. I had given up, then the BF suggested running into Target (it was on the way home). They had ONE left. After careful reading, I went ahead and opened it and sure enough it has the 3 SIMS.

I decided that I would purchase the Google Nexus next week after pay day and try to port my number and get all that fixed first. After it’s successful, then I will buy another AT&T SIM and get the iPhone up and running. Do you know if the iPhone has to be unlocked? I’ve read yes it does, and then I’ve read that if it was already with AT&T before the SIM swap then no it doesn’t. Which one is true? Also, does it being unlocked allow you to change the APN settings vs. Not being unlocked?

I’m nervous, but I feel like if all these other people can do it, then so can I. Especially with all the resources I have found. Worse comes to worse, I have to go back on AT&T… but I do not feel like that will happen. As you can tell, the more nervous I am, the more I talk.

I will post my experiences later next week or the week after that (depending on how long it takes me to complete the process). So for now, it is just researching and preparing for everything.

Thanks for your encouragement. I hope I have good results to report back to you!”

Wow, this is awesome,  you should write for  smartphonematters.com.  You have embraced prepaid. You are picking your own phones,  your own levels of service, and calculating the savings. Hats off to you..

Here are some things to consider:

Pay Your ETF and Get AT&T to Unlock Your iPhone

Remember as soon as you pay your ETF to put in your request to have AT&T unlock your iPhone. In fact, I would consider trying to pay the ETF first, submitting an unlock request with AT&T, and keeping the AT&T service until they unlock your phone. I think it took a week for them to unlock mine. I’ll check.  I don’t know if the SIM swap will work on a locked iPhone. Some say yes, some no. With the Net10 AT&T SIM, data would work.  Some readers swear you can’t get to the Cellular Data Menu if the phone is locked.

Port Your Number When You Sign up, or Wait

When you move to Net10, you can port your number immediately, or overlap your AT&T service and Net10 long enough to try out Net10. I ported my number later. It was a little confusing, but I ended up getting my number ported in a couple of hours.  One reader told me it took days for him to port his number after signing up.  As soon as your number is ported, your old SIM will go inactive.  Make sure when you talk to AT&T, you find out if you have a PIN on the account. You will need to give Net10 that PIN for them to port your number.

Don’t fear the SIM swap! Many readers go through my guide and get it working the first time.  Some ask me for help while others need to do additional steps I haven’t added to guide. Some can’t get it to work. I documented what worked for me, and update the guide when I get feedback  from readers.  Keep in mind  that in addition to the iPhone you may need to setup the APNs in the Nexus 4. You won’t need to SIM swap though.  I don’t think you will have a problem.  I had one reader yesterday, send me over 30 one and two line emails for help and she managed to do the SIM swap. And as I understand it, after I helped her, she turned around and did it for her sister! If you have a problem, I will try to help you.

I will be curious to hear how you like the Nexus 4. I had an unlocked Samsung Galaxy Nexus and I eventually sold it on eBay.  I found the phone to be too big, reaching to tap at the top of the screen with my thumb while using one hand.  I had the GSM model, it was a little lighter than the Verizon LTE model, but mine always felt unbalanced in my hand. I never really warmed up to Android. Which is surprising, as I usually like the more techy options.

The Nexus 4 isn’t the most advanced Android phone at this point. But it has alot going for it.  It’s inexpensive at $299 brand new. It is stock Android, it doesn’t have the usual extra UI added by Samsung, LG, Motorola…  The phone doesn’t support LTE, which isn’t an issue now. At this price, you could upgrade when Net10 or your next carrier supports LTE.  If you wanted to save a few bucks, check on eBay for a used one. You might get a good deal. I sold a lot of phones I had on eBay. It was a win-win for both parties. If you do buy new, remember to keep the box.  When I buy a phone I even keep the original accessories in there and use my old ones. If you decide you don’t like the phone you can sell it for top dollar on eBay that way.

I really appreciate you taking the time to share your plans with us. I hope to hear more about your quest to cut your cell phone bill in half. I spend most of my time on this site deleting spam from the comments, helping people with the SIM swap, and trying to make my guides clear. It is very refreshing to hear from someone putting in so much thought before they make the switch.