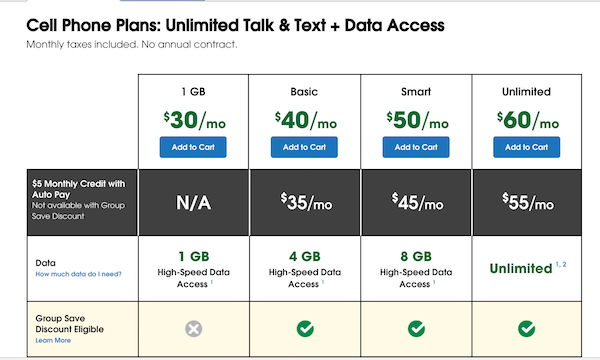 Cricket Wireless recently increased the amount of high speed data included with its $40 Basic Plan from 2.5 GB to 4 GB. This change adds 1.5 GB or 60% more data for the same amount of money.

The nice thing about this plan is that Cricket also offers a $5 per month discount when you enroll in the automatic payment plan, auto-pay, where they automaticall bill your credit card each month for your plan. And because Cricket’s plan includes taxes and fees, the Basic Plan with 4GB will only cost your $35 per month.

While the only the $40 Basic plan was updated in the last few days, I noticed the $60 Pro Plan which previously included 10GB has been eliminated and replaced with a $60 Unlimited Plan since I last reviewed Cricket’s Plans in January. The $5 Auto Pay discount also is available for this plan bringing the price to $55 per month.

Not long ago, Metro PCS updated their plans and included their $30 1GB plan to 2GB of high speed data per month. Looks like Cricket has repsonded by making their $40 Basic Plan more competitive rather than updating their $30 plan.

I you have read my previous articles and reviews you may know I switched my wife to Cricket’s 1GB plan back in January. She uses it with her iPhone and likes it. Cricket’s plans have a max download speed of 8Mbps but she doesn’t notice a difference over her old plan. Now even though $40 plan is $35, just $5 more for 3GB per month we aren’t going to change her plan. She won’t use that data and the additional $60 per year would pay for two moths more of service.