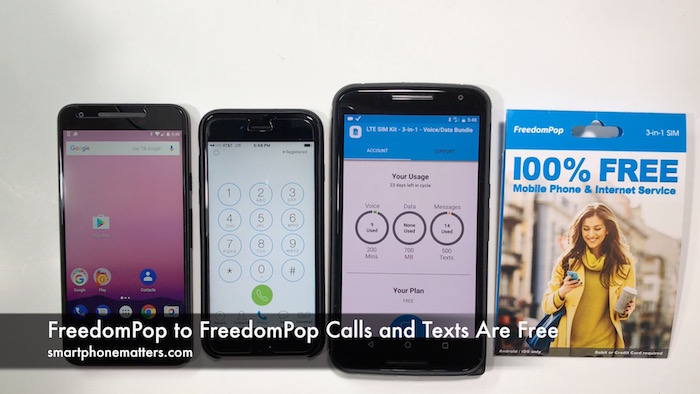 This sounds like a really cool feature and I wanted to test it out. I set up three phones. First a Nexus 5x using Google Project Fi. This phone has regular phone service. Second, an iPhone 6s and third a Nexus 6. Both the iPhone 6s and Nexus 6 are both using FreedomPop’s free Basic 200 LTE plans.

I decided to call and text the Nexus 6 from both the Nexus 5x and the iPhone 6s.I used the MyFreedomPop app on the Nexus 6 to see if voice minutes and text messages were subtracted from my balance.

Now, I also did the same thing from the iPhone 6s which is using FreedomPop. But this time, I was not charged for the 2 minute call and text message to the Nexus 6. So it appears that FreedomPop to FreedomPop calls and texts are really free.

So what about you? Are you using FreedomPop? Leave a reply below and share.

If you use the affiliate link below when you sign up for FreedomPop you’ll be helping to support smartphonematters.com at no additional cost to you.
100% Free Talk, Text, & 4G LTE Data w/ the NEW 3-in-1 SIM Kit from FreedomPop