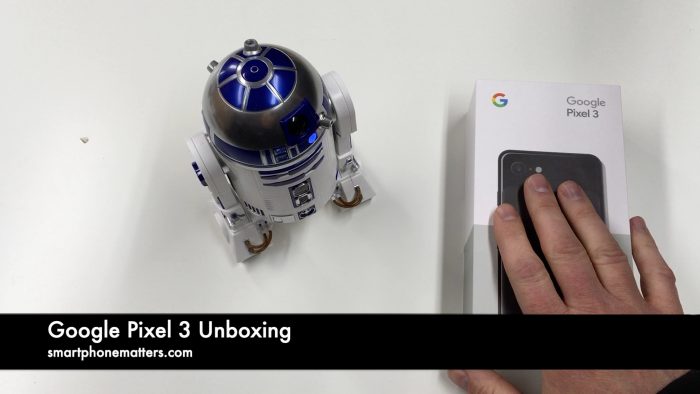 I picked up a Google Pixel 3 for myself around the 2018 Holidays. I want to spent a little more time using Android in 2019 but I wanted to do that if a pretty fast phone, a good camera, comes with Android 9.0 Pie, and gets regular software updates. My current Android phones are a Google Nexus 5X and a Samsung Galaxy S7 are both are getting a little old. I decided on I bought the Pixel 3 (not the Pixel 3 XL), Black, with 64GB of storage. I didn’t want the larger phone, as I’ll be carrying two different phones.

I write about prepaid wireless service, I’m not a tech reviewer. If you are interested in the specs on this phone, see Google Pixel 3 Tech Specs. I don’t know too much about specs for Android phones. I know some other reviewers on the internet criticized Google’s choice of processor and the amount of RAM, all I really care about is if the performance is good, so we will see.

Inside the box was the Pixel 3, an 18W 2A USB-C wall charger that supports fast charging and and 1.5M USB-C to USB-C charging cable. Also included are a pair of USB-C ear-buds in white and a USB-C to 3.5MM headphone jack adapter. They also includes an USBC to USB-A quck Switch adapter used to transfer data from your current phone to the new one. Finally they also included a SIM ejection tool as well as Google and team pixel stickers.

I think the black phone looks and feels good. The back is glass. It’s textured so it isn’t slippery like my iPhone X. The Pixel 3 has bezels around the screen, but not notch like the Pixel 3 XL and iPhone X models. The Pixel 3 XL notches looks pretty ugly and had been heavily criticized. I like the look of the phone without the notch. My iPhone X has a notch and I got used to it, I don’t really notice it anymore. I’d assume I could have gotten used to the 3 XLs notch too. I just didn’t want the larger more expensive phone.

The rear camera is 12.2 MP. so far, I have only taken a few pictures with it but the photos look good. I look forward to trying it out more.

I considered two other phones, the Samsung Galaxy S9 and the OnePlus 6T. There were some great deals on the S9 for Black Friday, it was selling for close to $500 if I recall. I made a video about it but didn’t order one. I think the S9 is a undervalued phone and I am biased against Samsung. I also considered the One Plus 6T. Everyone praises this phone as a top of the line phone at a mid range price. I am not sure I believe that when you compare the cost of the 6T and S9.

I decided against the S9 because I feared that like other Samsung phones, performance would lag over time. I ruled out the 6T as I wanted a phone to use for reviews that would support AT&T. T-Mobile, Verizon or Sprint. If I understand correctly the 6T only supports Verizon’s LTE network but not the CDMA network and it doesn’t support Sprint at all. And finally, I wanted a phone that I know would get regular software updates for a couple of years.

I also picked up a Google branded Pixel 3 Case in Carbon. The case has a nice fit. The back is a cloth material and feels good. The case is $40 new, but I bought an open box one for about $20 from eBay. It looks new, I’m happy with it. I never had a cloth backed case before but this looks good.

So far I like the phone overall. I wish it had a face lock feature. It relies on a rear finger print scanner. A double negative for me. I’d prefer it on the front. I need to get used to Android 9. I restored my Apps when I set up my phone. Unfortunately it looks like that moved over some of the Verizon apps that were on my S7 so I needed to delete them. I’ll be back with more updates after I use the phone for a little while.