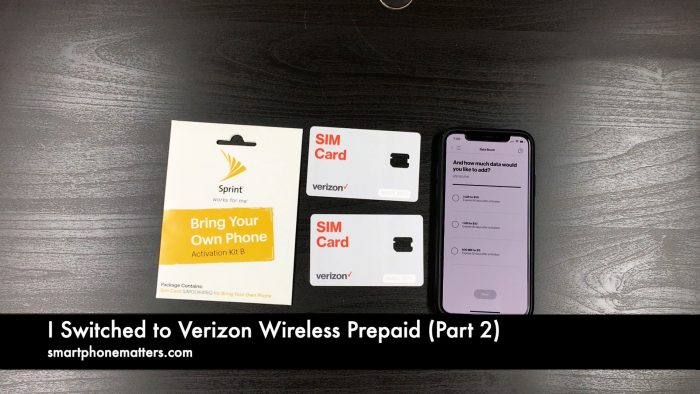 My wife and I switched to a new prepaid wireless carrier, we chose Verizon Wireless Prepaid and below I’ll tell you why. I discussed this story in a two part video on my YouTube channel but decided to publish only one article. See the videos below.

Part 1 – A Year with Sprint

For the last year both my wife and I have been using Sprint post paid wireless service. This may surprise you that someone who has been publishing article and videos about prepaid wireless plans is using postpaid service from Sprint. Turns out last year, Sprint had a promotion where you could get one year on unlimited talk, text, and unlimited data for free. Yes, for free, well not totally free I’ll explain in a moment. Sprint ran a very aggressive promotion to get Verizon customers to switch to their network, claiming the coverage “was within 1%” of Verizon. To prove it they offered one year of free service if you switched and brought your own phone.
I decided to switch. I had some concerns about the Sprint coverage, but since I have this web site and my youtube channel I usually always have a backup phone with me on some other network. If I ever ended up in an areas without Sprint coverage, I always would have a least my Tracfone ATT SIM with me if not another phone. I also wanted to try the Sprint network. I did not have much experience using it except for my Google Fi phone which sometimes would use the Sprint network.

If you read smartphonematters.com, you know I always tell people to read the fine print, and I was skeptical about whether or not this would really be free. According to the fine print, I’d have to pay the sales tax for the plan which normally costs $60. I’d also need to pay some fees. When all the math was done, it wasn’t free it was $4.09 per month for unlimited talk, text, and data. That was acceptable to me, so I ordered a SIM card and transferred my number. The SIM card cost me $3 and I had to pay $10 for them to overnight it to me. I signed up, and tried it seems to work fine. When I told my wife about it and she found out it was $4.09 per month, she said sign me up! I told her the her coverage would change and that it could be better or worse, but at $4.09 she was in.

I was previously using Straight Talk’s $35 plan on their AT&T networks and felt I could find a better deal so I was ready for a change myself. My wife was on Cricket Wireless’s 2GB $30 plan which uses the AT&T network and she was happy with the service.

We liked that Sprint had Visual Voicemail for our iPhones, Wi-Fi calling, and Mobile Hotspot. We used Mobile Hotspot one day when our home network was down and we had work to do. We were able to connect our computers to the internet and take care of business. MY experience with their Wi-Fi calling wasn’t so good. I used it for a few months but realized many of my calls at home were dropping when I walked into areas at home without Wi-Fi. The phone did not switch between the cellular and wifi networks and had of the calls. Turns out my phone service was better without Sprint’s Wi-Fi calling as it did not drop calls once I turn off the feature. One feature they had which was cool was secure hotspot at the airport. My phone automatically switched to a Sprint managed Wi Fi service so I did not need to use the free airport hotspot.

In late June Sprint let us know that the promotion was ending. The price of our plans would go up to $60 per month. Based on some usage calculations I did it was clear that we don’t need an unlimited data plan so we were not going to pay $60 per month for service we don’t use. And to be honest, Sprint’s coverage in our area isn’t as good as AT&T or Verizon, and maybe even T-Mobile too. We live in the Boston metro area, so Sprint may have the best coverage where you live, put is just wasn’t as good for us.

After my part 1 of my video, some viewers recommended Tello, Visible Wireless, Mint Mobile, and Page Plus. I also considered Simple Mobile, Total Wireless, or Net 10 Wireless. All of these carriers have plans with unlimited talk and text, and fixed amounts of high speed data at affordable prices. Our preference was the AT&T network, but Verizon has good coverage in the area too. T-Mobile coverage can be really good too.

I was leaning towards Mint Mobile or Simple Mobile which use the T-Mobile network. After I explained the costs to my wife she wanted to go with Verizon Wireless Prepaid. She had a bad experience on the T-Mobile network in the past. Even though she understands the network has completely been upgraded since them sometimes it hard to forget that experience.

We chose the $40 unlimited talk, text, with 3GB of 4g LTE data plan. The price on that doesn’t sound too good, but one you add in the discounts and promotions the plans are competive for being on the Verizon network. Verizon has a limited time promotion where they double the monthly data from 3GB to 6GB. You get a $5 discount when you sign up for Auto Pay. You let them bill you credit card automatically each month and the price drops to $35 for in your second month and going forward. Next, they had a $10 discount per month when you add a second line. So for the first month our bill for two lines is $70 and for the following months its $60. The charge state sales tax but not additional fees. My first bill was $74.38 when you add in MA state sales tax of 6.25%. I estimate the bill will drop to $63.75 for future months. That comes out to $31.88 per line after the first month for unlimited talk, text, and 6GB of 4G LTE data on Verizon’s network. That is a very competitive price.

We liked the fact the this plan includes Visual Voice mail, Mobile Hotspot, and Wi-Fi calling. Verizon wireless prepaid includes many features s their post paid service. Other prepaid wireless companies that also use Verizon’s towers don’t include these features.

As for the downsides. First, I have found in the past that Verizon’s coverage at my home isn’t as good as AT&T. Coverage outside my street is actually really good. Also, based on my calculations, 6GB of data may be too much for our needs meaning we should look for less expensive options. We plan on travelling more in the US this year, so expect our need for data and hotspot will be higher. My wife does not like to use public Wi-Fi or even the wi-fi at work with her phone so she may use more data. I currently signed up for Spotify streaming music. I got three months for $1. I want to try that out when I am out of the house and in my car so I’ll be using more data for that too.

If I find that I am not using all that data, I may switch my line to a plan with less data to save some money. Something in the $15 to $25 per month range. I’m looking forward to trying out Verizon prepaid myself. I’ve reviewed the service aa couple years ago, but now I’ll be living with it.

What service are you using? Leave a reply below and share.

Here is part one of my video
http://bit.ly/2NZbPsH

Here is part two of my video