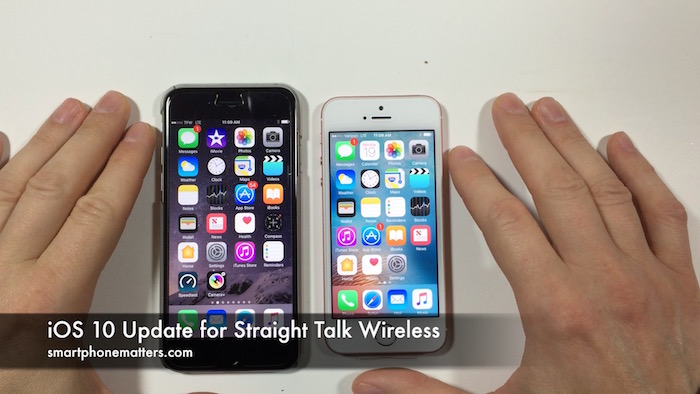 Last night I updated my iPhone 6s and iPhone SE to iOS 10.0.1. I am happy to report that both of my phones are working with iOS 10.

Both of my iPhone’s are now using iOS 10.0.1. The dot 1 means that Apple has already released one update for iOS 10. Supposedly, some iPhone users had problems installing iOS 10 and Apple needed to release an update to fix the problem.

I had no problems installing iOS 10.0.1 on either phone. Before installing iOS 10 its a good idea to do a full backup on your phone. Updating to iOS 10 will not erase any data from your phone, but it’s smart to have a backup you can revert to if something goes wrong. I backed up my iPhone 6s using iTunes on my Mac. I did not backup the iPhone SE as it doesn’t have any important data on it.

After backing up your iPhone, check to make sure that your Straight Talk service is working on your phone. Make sure that you can make and receive phone calls as well as send and receive text messages. It’s really important to check that you can send and receive MMS picture messages. I recommend doing this with someone that does not use an iPhone so find someone with an Android phone. That way you’ll know the picture messages were sent using MMS rather than using Apple’s iMessage over your cellular data connection. After checking MMS, I recommend using the Speed Test app to make sure your cellular data is working and to measure the data speeds.

After the update, repeat the process. Make sure you can still send and receive MMS picture messages. Use Speed Test again to make sure your cellular data works. Compare your current speeds to results from before the update. If your data speeds dramatically dropped you may be having a problem with the update.

As I explain in the video, I did all these things and my iPhones are working well with iOS 10 so far. Obviously, iOS 10 is new and their could be other problems but so far I haven’t had any issues with Straight Talk.

What about you? Have you installed iOS 10? Or are you playing it safe for a while? Leave a reply below and share.