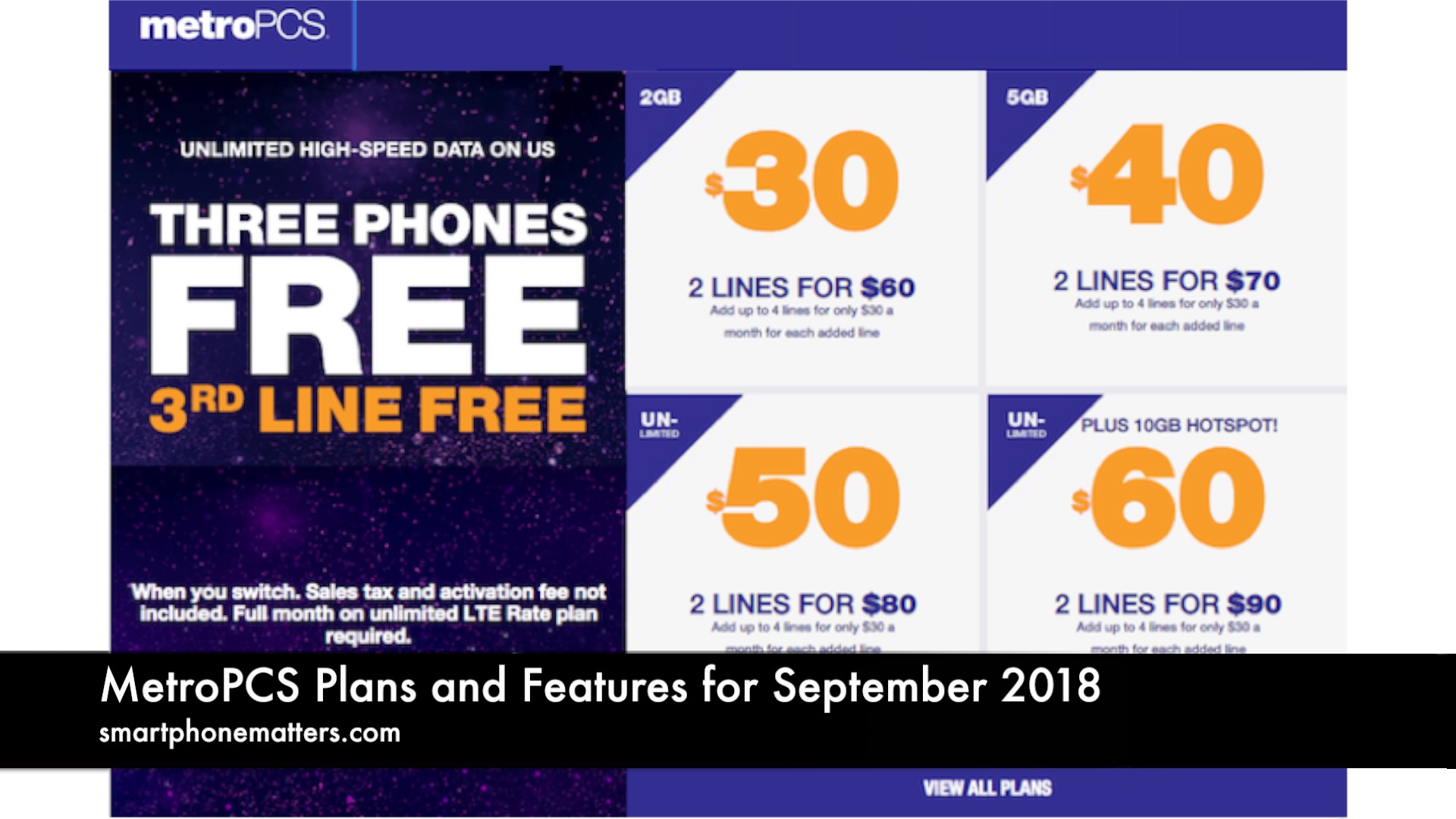 Today, I wanted to check out the latest metroPCS plans and features for September 2018. It’s been a while since I took at look at Metro so lets see what they have to offer.

metroPCS is a prepaid wireless service that uses the T-Mobile 4G LTE network. If you use your phone in an area where T-Mobile has good coverage, metroPCS migh be a good choice for you. In fact, T-Mobile owns metroPCS, they bought the company several years ago to combine metro’s wireless spectrum with T-Mobile’s to improve T-Mobile’s network coverage. T-Mobile also kept the metroPCS brand alive and it is focused solely on prepaid wireless plans.

MetroPCS offers four different prepaid wireless plans ranging in price from $30 to $60. MetroPCS says that plan price is exactly what you’ll pay each month and that all taxes and regulatory fees are included. In 2018 though several readers have told me that metroPCS was charing them taxes and fees so I am looking to hear from more metroPCS customers about this.

All four metroPCS plans include unlimited nationwide talk and text.

All metroPCS plans have Wi-Fi calling. With Wi-Fi calling, you’ll be able to use your phone service with an active Wi-Fi connection rather than their cellular network, so you’ll have coverage even if you have a little or no cellular signal at your location. To use Wi-Fi calling your need a phone that supports the feature on the T-Mobile network.

All metroPCS plans include visual voicemail on phones that support it, that’s iPhone and select Android phones. If you phone doesn’t support Visual Voicemail you’ll still have regular voicemail.

All metroPCS plans include ScamID. With Scam ID, MetroPCS will identify, flag or block fraudulent and scam callers.

All metro PCS plans either include fixed or unlimited high speed 4G LTE Data. Unused data on the fixed plans expires at the end of each month. For fixed data plans, if you exceed your monthly limited of data you’ll still have internet but at significantly reduced speeds. On the unlimited plans, if you exceed 35GB of high speed data per month, metroPCS may reduce your data speeds due to prioritization. metroPCS defines reduces speeds for fixed data plans as XXXkbps but does not detail what reduced speeds for unlimited plans are.

For 4G LTE data, metroPCS does not have an enforced maximum download speed.

metroPCS provides Data Maximizer to help you conserve your high speed data when watching video online. Data Maximizer reduces the amount of data consumed to watch HD videos by reducing image resolution from HD quality to SD quality. metroPCS says that Maximizer can reduce the amount of data used by one third and that it optimizes the image quality for smartphone screens. MetroPCS doesn’t state whether you can turn this feature on or off though. On a fixed data plan, this could be considered a feature as it will help prevent you from running out of data. However on an unlimited plan, it really helps metroPCS save data, not you. That is unless you are concerned about reaching the 35GB limited per month on the unlimited plans.

All MetroPCS plans except the $30 plan include Music Umlimited. With Music unlimited you’ll get unlimited streaming from Apple Music, Spotify, and other supported music service. The data you use for streaming is not deducted from you data limits. You’ll still need to pay for your own music subscription.

All the feautures above are included on four plans listed below.

The $30 plan includes 2GB of high speed data. This plans does not include Music Unlimited. This plan does not qualify for a multi-line or family plan discount.

The $50 plan includes unlimited of high speed data. This is the only metroPCS plan that does not include Mobile Hotspot.

The $60 plan includes unlimited of high speed data and 10GB of data for mobile hotspot.