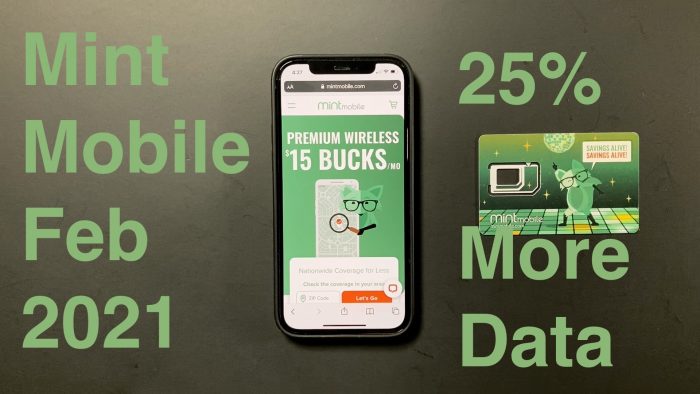 Mint Mobile has added 25% more data to their fixed data plans. On January 28th, Mint Mobile increased the amount of high-speed data included on three of its four plans.

The good news is that both new and existing customers on these plans will receive the additional data each month. While I was unable to find any statement about this on mintmobile.com, I checked the Mint Mobile app and it showed my 3GB per month is now 4GB per month. Mint also sent me a text message, stating that I stated an new month with 4GB of data “in the tank”. Thanks, Mint!

Ok, so that is what is new with Mint Mobile. If you are n If you are not familiar with Mint and interested keep reading and I’ll tell you a little more.

First, I’m a Mint Mobile customer. I reviewed the service in 2020 and was impressed enough that I switched my main number to Mint Mobile. My wife also switched to Mint, and so did my brother. If you haven’t had a chance. Check out my Mint Mobile Review, Mint Mobile Prepaid Wireless Review June 2020. Also see I Switched To Mint Mobile.

Is Mint Mobile right for you? Well that is up to you to decide. Here is a short explanation of what you need to know.

First Mint uses the T-Mobile network. If T-Mobile has coverage where you use your phone, Mint may be an option for you.

OK, so what is different about Mint Mobile? Well, it’s the price. With most prepaid wireless services you pay one month or 30 days in advance for your service. With Mint you pay three, six, or 12 Months in advance. This allows Mint to offer lower prices, and the farther you pay in advance, the lower your average cost per month is. And the savings are significant.

Note that with Mint Mobile, you need to pay for your service three, six, or twelve months in advance. If you cannot afford to pay in advance or simply are unwilling to, then Mint Mobile isn’t right for you.

Now let me tell you about the four plans and explain how this works. Mint has four different plans. These plans include either 4GB, 10GB, 15GB, and “Unlimited” (35GB) of high speed data. All plans include:

With Mint Mobile, keep in mind two points. First, what is your average monthly cost for your plan. Second, how much and how often do you pay. Here I am going to use the 4GB per month plans as an example. The average cost for the 4GB plan is either $15, $20, or $25 per month.

Sign up for twelve months in advance and it will cost you an average $15 per month. You’ll pay $180 up front for one year of service.

Sign up for three months in advance and it will cost you an average of $25 per month. You’ll pay $75 up front for three months of service. That is four payments of $75 per year for a total cost of $300.

So the savings are substantial. The difference between paying every three or twelve months is $20 per month or $120 per year.

The 10GB, 15GB, and Unlimited per month plans work the same way.

Additionally, Mint Mobile has a special intro offer. This offer is designed to offer you a chance to try out Mint Mobile. When you sign up for your first three months, you’ll get the same monthly rate as twelve month customers.

So for example, with the Intro offer you’ll pay only $45 for your first three months on the 4GB plan, for an average cost of $15 per month. After three months, if you stay with mint the normal plan prices apply. At this point you can decide to stay on the three month plans or switch to the six or twelve month plans.

Finally, you should consider how likely your cell plan needs are likely to change the next three, six, or twelve months. For example, is it possible that you might need to use your phone someplace where T-Mobile doesn’t have coverage. For example, if you move or switch jobs. And, do you think your data needs will change over that time. With Mint, you can upgrade to a plan with more data at any time simply by paying the difference between your current plan and the new plan. But, if you need less data, you can’t switch to a lower plan and receive a refund. You’ll need to wait until your plan renews.

Hopefully this article helps you understand how Mint Mobile works. Be sure to check out my review, linked above, and my video below.