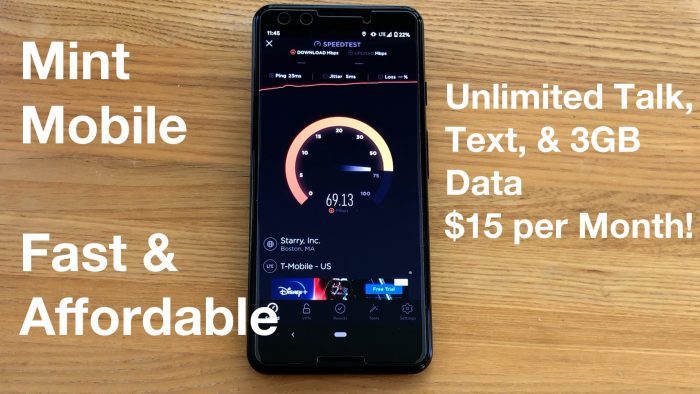 Mint Mobile offers affordable plans with unlimited talk, text, with fixed amounts of high speed data.I’d definitely recommend provided the T-Mobile network has coverage in your area and your budget allows you to pay for monthly plans three, six, or twelve months in advance. I think its one of the best prepaid wireless services I’ve ever tried.

If you are interested in signing up of learning more about Mint Mobile, visit mintmobile.com

For the last few months, I’ve been trying out Mint Mobile . Here is my review.

Mint Mobile uses the T-Mobile network. Where I live in the Boston area, T-Mobile coverage is very good. I’ve also had very good coverage with T-Mobile while traveling between Boston and New York. I would have liked to try out Mint in more locations in Metro Boston, but given the current Stay at Home orders in the US, I haven’t been a able to get out as often as I normally do.

Mint Mobile offers affordable monthly rates on their unlimited talk, text, and fixed 3GB, 8GB, and 12GB data plans. Plan prices are as low as $15, $20, or $25 per month there is a catch so read on.

Mint Mobile also has a special introductory offer. you can sign up for three months and pay the same monthly rate as the twelve months plan. This is an excellent offer because it allows you to try out Mint Mobile at the lowest monthly plan prices before signing up for six to twelve months.

I signed up for the 3GB plan and ordered the bring your own phone kit from mintmobile.com. I followed the instructions in the SIM Kit and signed up using the web browser on my phone. My phone was connected to the Internet using my home Wi-Fi connection.
When I signed up I used my Google Pixel 3 (android) phone and later moved the SIM to my iPhone SE(the new one from 2020). Every thing worked well on both phones.

When you sign up you can choose to buy a phone from Mint or use your own. When I signed up I used my Pixel 3 and later moved my SIM card to my new iPhone SE.

Phone calls were clear and crisp on both iPhone and my Pixel.

Text Messages as well as picture and group messages all worked automatically without any problems. I did not have to go in and set up and network or APN settings.

My high speed data worked well. The speeds were good in the metro Boston area. A quick couple of speed tests showed download speeds close 70Mbps. After you use up your hight speed data balance you’ll still have reduced speed data.

Wi-Fi calling lets your phone make and receive calls and text message over your Wi-Fi connection rather than over the cellular network. This lets you use your phone in places where you have little or no cellular signal but do have access to Wi-Fi. For example, if for some reason you don’t get good coverage in your phone or office building or say you are traveling outside the US, you’ll still be able to use your phone.

All I needed to do was use the Mint Mobile app to provide my E911 address and then turn on Wi-Fo scaling in the settings on both my iPhone and my Pixel 3.

Mint Mobile has Mobile Hotspot too.

Mobile Hotspot lets you share your phone’s cellular data connection with your laptop, tablet or other Wi-Fi device so you can connect them to the internet.

I was also able to turn on and connect my iPad to both my iPhone and Pixel without issue.

Visual Voicemail lets you view voicemail messages you receive and listen to your messages in any order on your devices. You can scroll through your messages, pick the ones you want to listen to, and erase them right from your device’s screen.

I was able to set up and use Visual Voicemail on both my iPhone SE and Google Pixel 3 with no issue. The service even provided message transcriptions so I could read the messages instead of listen to them. I even got a voicemail from Ryan Reynolds, apparently he owns a stake in the company.

My customer experience with Mint Mobile was excellent. I was able to order my BYOP SiM Kit and set up my new number without issue. There online FAQ section is well written and comprehensive. During the time of my review I did not need to contact customer service for any issues.

So Is This a Good Deal?

I think Mint Mobile is a good deal and I’d recommend it provided that:

You can check the mintmobile.com to see a coverage map to see if Mint has coverage in your area. I’d also encourage you to talk to family, friends, neighbors, or colleagues to see if anyone is using T-Mobile and how well it works for them. I find that coverage maps are better for finding out if an areas doesn’t have coverage than whether or not your actual coverage will be good.

You’ll also need to decide if you are able and willing to pay for prepaid service tree, six , or twelve months in advance. Some people can while others have a tighter budget.

Finally, think about how likely your cellular needs are likely to change. Are you likely to pack up and move to another area? Chance jibs and start working in another location? Spend more time on the road travelling? Think about whether or not you’ll start to using your phone where Mint doesn’t have coverage? Will you needs. for data go up or down? If you suddenly need more data, you can upgrade to a higher plan. If you need less data, you can move to a lower plan, when it is time to renew.

What do you think? Does Mint Mobile sound like it might be good or you? Leave a reply below and let me know what you think.

If you are interested in signing up of learning more about Mint Mobile, visit mintmobile.com