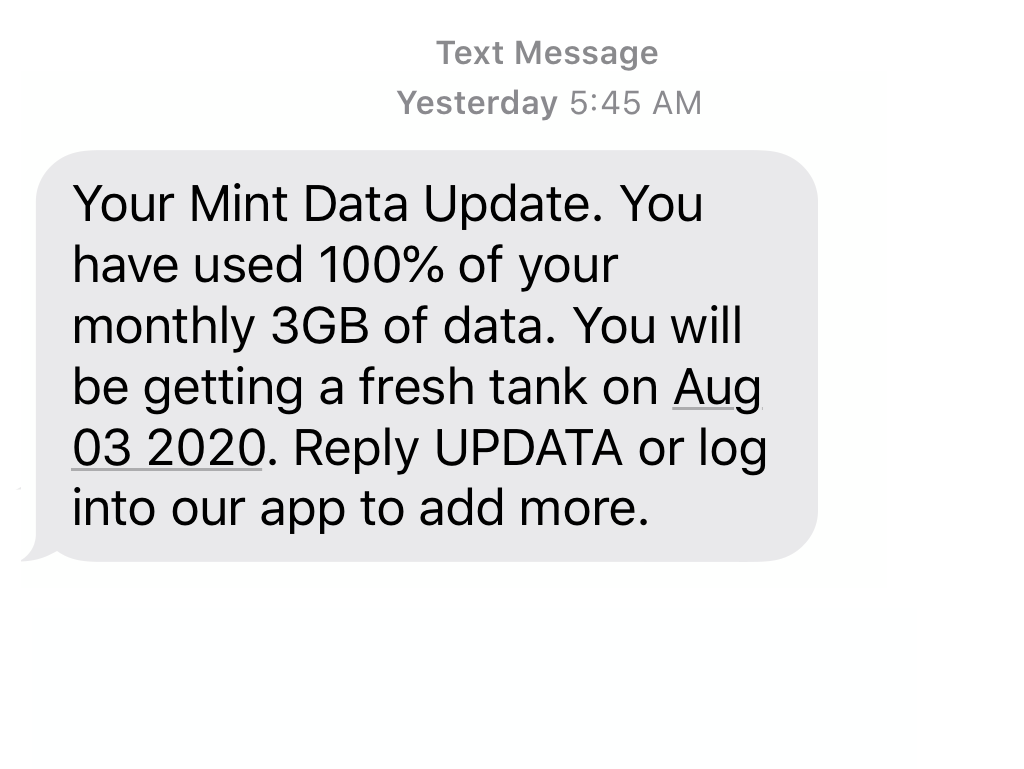 In my first month using Mint Mobile’s 3GB $15 per month plan I used up all my high speed data. For the next 13 days I’d need to either live with reduced speed data or add more high speed data.

Recently, I’m always telling people don’t pay for data you don’t need and that I only need a vey modest amount of data. So what happened? It turns out I used up over 2GB of my 3GB of data downloading and streaming podcasts to my iPhone. This was completely avoidable. I could have easily downloaded these podcasts over Wi-Fi before leaving my home or office. I think I got used to have 6GB of data when I was using Verizon Wireless Prepaid.

I’m still going to stay on the 3GB plan. I’ll just manage my data a little better. It’s not really an effort and I’d rather continue paying $15 per month.

I created a couple of videos about this, watch them below.

I wanted to share some more details with you.

First, reduced speed data is really slow. Your data will be acceptable for doing some some things that don’t require to much data, but some stuff just don’t work well.

What worked with reduced speed data

I was still able to browse the web and search Google but browsing was slow. How fast or slow a the web sites you visit are depends on the specific site. web sites with lots of images are very slow.

So far, I have still be able to use Waze, my maps and navigation app. I haven’t visited anywhere new, but I did get traffic condition and reports while driving to some usual stores and local errands.

I was not able to listen to streaming music or watch streaming video. I tried to use the YouTube app and while the app open it took some time for any videos to appear in the app. I tried to watch a video and it didn’t play. The preroll add eventually played but it was an unusable experience. I also tried to play a podcast from Spotify. It didn’t play at all. I’m not surprised.

I went to the CVS pharmacy to pick up some stuff. I have a loyalty card in the CVS app. Turns out CVS released a new update to the app, and I needed to download the update to use the app. The one on my phone would no longer function. I was unable to update the app with reduced speed data. CVS doesn’t have free Wi-Fi for customers, so I was unable to use my loyalty card. I don’t carry the card, and I didn’t feel like asking them to look it up by phone number. I was planning to use some reward dollars so I just decided to skip an extra purchase.

While most people won’t do this. I wanted to measure the reduced data speeds to see how slow they were. See the results in the image below.

I normally use the Speed Test app by Ookla but I initially had surprising results. I measured the data speeds with this app, they were still really fast. It turns out that either Mint Mobile, or more likely T-Mobile(the network they use) does not limit the data speeds for this app when you are on reduced speeds. The result, I was still measuring high speed internet, but not getting that when actually using my data. I wish they wouldn’t do this.

I’m still completely satisfied with Mint Mobile and recommend it. It make sense for me to use a plan for people with modest to moderate cellular data needs. I pay for unlimited high speed Verizon Fios service at home (100Mbps) as that is where both my family and I use the most data.

To see some demonstrations of the things discussed on this video, watch the videos below.