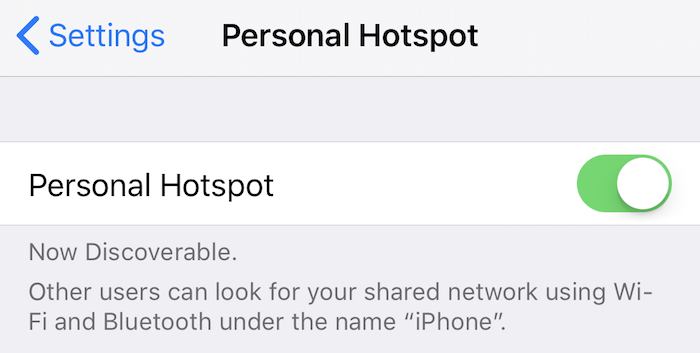 One of the most frequently discussed topics on smartphonematters.com is Mobile Hotspot. Mobile Hotspot lets you connect your laptop, tablet, or other Wi-Fi device to the internet using your phone’s cellular data conntection. In this article I’ll discuss mobile hotspot, your needs, and tell you which prepaid wireless carriers include mobile hotspot with their plans.

Please note that if your hotspot isn’t working or if your plan does not support hotspot I do not have any information about how to get it to work.

Note that there are two different types of mobile hotspot that people typically talk about. First is the type discussed above where it’s a feature of your phone and wireless plan. The other type of hotspot, is were you have a separate dedicated Wi-Fi hotspot device and maybe even a separate plan that you pay for in addtion to your cellular bill.

When shopping for a plan with Mobile Hotspot, consider what your needs are. How much data do you want to use with hotspot? How many devices do you want to connect? Are you looking to use hotspot for your laptop or tablet occasionally while traveling while you don’t have access to W-Fi? Do you want to use mobile hotspot at home instead of a cable, fiber, or DSL home internet connection?

Other people I hear from want to use their phone’s mobile hotspot feature as their only internet connection at home. They want to connect multiple computers, laptops, tablets, gaming consoles, TVs, and other devices to the internet with hotspot. I’ve heard from people that use it to watch Netflix, HBO, or other streaming services on their TV. Others want to use it for PC or console gaming. This includes playing online games for hours as well as downloading 100s of GB of data initially needed to play these games. Most wireless plans with hotspot do not allow this.

It’s far less common to find a wireless carrier that includes “unlimited” data for hotspot. Even if a plan does, they typically with add restrictions such as limiting the number of devices you can connect to hotspot and offering reduced data speeds for hotspot.

Also note that some wireless companies only include hotspot with some but not all its plans. Some may include it with all the plans with fixed data, but not unlimited data. Others may not offer it with their lowest price plans. Others may charge more for a plan that includes hotspot.

I understand that many people think unlimited hotspot should be included with unlimited plans. They paid for unlimited data, right? Unfortunately that isn’t the way things work. Wireless companies set the terms for their plans. You as a consumer, decide whether to pay those plans. Exercise your power as a consumer. My opinion is that the reason that none of these companies include unlimited hotspot is because it isn’t viable for them to do so. The current 4G LTE network technologies the wireless companies use wasn’t designed for this. Using 4G LTE this way, puts a huge strain on their networks. Moving forward, the 5G network technologies that the carriers are going to roll out may provide hope for this kind of service.

Currently I am only aware of one company that offers unlimited mobile hotspot and that is Verizon prepaid, see the description below. The rest offer fixed amounts of data on unlimited plans or you’ll pay for the additional data you use on fixed data plans.

You can use Personal or Portable Hotspot with Verizon Wireless Prepaid. With Verizon’s fixed data plans you can use all of your data up to your plan’s limit with hotspot. If you need more data, you can buy add-on data. With Verizon Prepaid’s Unlimited plan, you can use an unlimited amount of data with personal or portable hotspot. However, with hotspot, the data will be slower than the speeds you normally see on your phone. Verizon sets a limit, or maximum download speed of 600Kbps for hotspot.
Click here to check out Verizon Wireless Prepaid

You can also use Personal or Portable Hotspot with AT&T Prepaid. With AT&T’s fixed data plans you can use all of your plans data, up to your plan’s limit for hotspot. If you need more data, purchase add-on data. AT&T prepaid has two unlimited plans. The less expensive plan, does not include hotspot. The other unlimited plan, which is $20 more per month includes up to 10GB data for hotspot.
Click here to check out AT&T Prepaid

Simple Mobile includes Personal and Portable Hotspot with all of its fixed data plans and one of its unlimited plans. If you are on a fixed data plan, you can use up to your entire amount of data with Hotspot. If you use up all your data, you can use their add-on data feature to buy more. Simple Mobile has two unlimited plans. The plan that supports hotspot will let you use hotspot costs $10 more per month and you can use up to 10GB per month with hotspot.
Click here to check out SIMPLE Mobile

Cricket Wireless offers Personal or Portable Hotspot as $10 add-on feature. For Cricket’s Fixed Data plans you can use all of your high speed data with Hotspot, after you use up your data hotspot will still work at the lower 128kbps speeds. Cricket has Unlimited and Unlimited Max Plans both of which let you use up to 10 GB of data with hotspot. After 10 GB, your data speeds are slowed to 128Kbps. Note that with Cricket all plans have a maximum download speed of 8 Mbps except for the Unlimited Plan which has a max download speed of 3 Mbps. The Unlimited Max plan has a maximum download speed of 8 Mbps. Also note that with Cricket even though Hotspot is a $10 per month add-on, that means you only need to pay for it during the months you want to use it.
Check out Cricket Wireless here https://www.cricketwireless.com/

Google Project Fi includes hotspot. The service uses a combination of the T-Mobile, Sprint, and US Cellular networks. With Fi, you’ll be able to use hotspot, but with Fi you pay for all the data you use. Currently, it costs $10 per 1GB up to 6GB. At 6GB or more you’ll pay $60 per month(for data). The plan details and FAQ are not clear about what happens with hotspot. Does this mean you can effectively have unlimited hotspot on Fi for $80 per month ($60 for data plus $20 for talk and text).
Check out Google Project Fi here https://fi.google.com

Boost Mobile also includes hotspot with their plans. They use the Sprint network. All of their plans support hotspot. Their fixed data plan will let you use all of your high speed data for hotspot. After all of your high speed data is used, you’ll have reduced speed data. Boost Mobile has three different unlimited plans for $50, $60, and $80 per month. The plans include 8 GB, 20 GB, and $40 GB of hotspot per month.
Check out Boost Mobile here https://www.boostmobile.com/