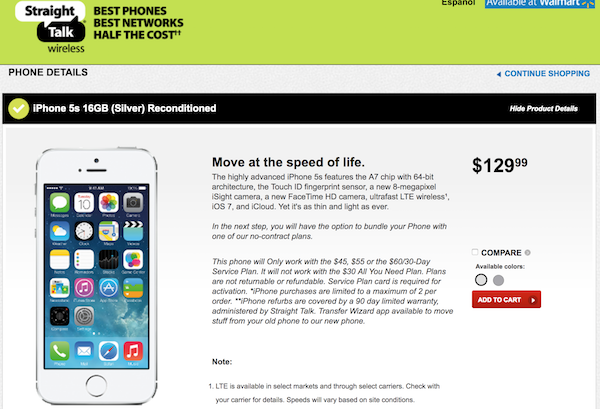 Over the last three months about a dozen people have asked me about buying an iPhone from Straight Talk and then using that iPhone with another wireless service or using in another country. My response is don’t do it.

While it’s great that these iPhones are affordable, they are not meant for use with other carriers. You shouldn’t expect to buy and iPhone from Straight Talk or any other carrier and expect to use it on another network or with a foreign carrier. Wireless companies sell these phones for use by their subscribers.

Now, I know in the past some people have bought iPhones from Straight Talk and found they have been able to use them with other carriers. And sometimes is is possible to buy an iPhone from one carrier and use it with another carrier or in another country. But it seems that Straight Talk is now taking the steps to prevent this buy locking the phones. They do have an unlock policy andd will unlock the iPhone after you have used it for one year.

So my advice for most people is that if you want to buy a phone to use with different carriers or outside the US, buy an unlocked iPhone. If you want to take a chance a Straight Talk iPhone will work on another network, spend a little time online to see what others are saying. Both walmart.com and target.com have review sections and Q&A sections. A quick look in the Q&A section for the $150 iPhone 5s on walmart.com and you’ll see that a tracfone rep stated that the phone was carrier locked. That iPhone also had about 1200 reviews and over 800 questions and answers. Read what other people say.

Now, some of you may be asking what do I need to do to buy an inexpensive iPhone that I can use on any network or in another country. Perhaps I’ll write an article or make a video about that too if there is any interest.

So what about you? Did you buy a Straight Talk iPhone only to find out that it was activation locked? Would you like to see an article on how to buy an iPhone for use in another country? Leave a reply below.