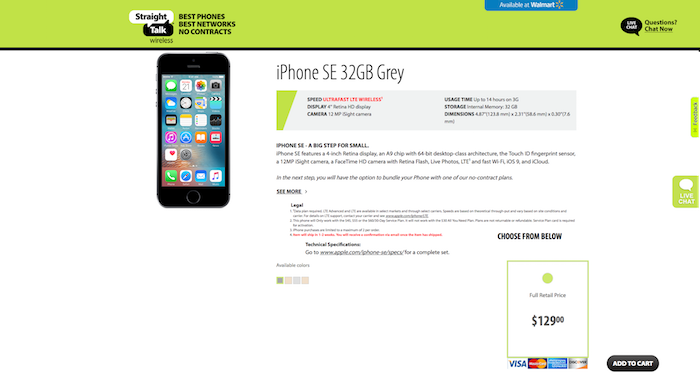 Let’s run through some specs, starting with the basics. I paid $129 for my new iPhone SE plus state sales tax so it came to just over $137. Straight Talk included free overnight shipping. I ordered it in the evening, it shipped the next day and it arrived the day after. A signature was required, so make sure someone is available to sign for the package. The iPhone SE comes in four colors and Straight Talk offered the choice between Space Grey, Silver, Gold, and Rose Gold. I ordered the Space Gray which is black on the front and grey on the rear. All the other colors are white on the front. While Apple sells the iPhone SE with either 32GB or 128GB of storage, Straight Talk only sells the 32GB model.

The Straight Talk iPhone SE comes new in the box. Straight Talk attaches a pouch to the back of the box’s shrink wrap that contains a nano SIM card and activation instructions. My phone came with a Straight Talk Verizon nano SIM. Your phone may come with a SIM for the AT&T network depending on your zip code and which network Straight Talk decided works best in that area. You can use the Live Chat feature on straighttalk.com to ask them which towers the phone will use it your area. Just say, “Hi I am thinking about buying the Straight Talk iPhone SE. I live in zip code 02108 (use your zip). Can you tell me if the phone uses the AT&T, Verizon, T-Mobile or Sprint towers?”. On the back of the package you’ll see this iPhone SE can be used with either Straight Talk or Total Wireless. I’ll talk about Total Wireless later. The back of the pouch also has some details about the terms and conditions and activating the phone.

Now I wasn’t planning to activate this phone with Straight Talk’s Verizon network. I want to use it with my existing Straight Talk service that uses the AT&T towers. I was able to move my Straight Talk AT&T nano SIM into the iPhone SE. The iPhone set up the APN automatically and I could make phone calls and use cellular data. So I am able to use the phone with my current Straight Talk ATT service.

I know many people will want to know if they can buy this phone and use it with another carrier. Many people want to buy these discounted iPhones from Straight Talk and use them with outside the US or give them as gifts. But, these phones are activation locked and cannot be used with other carriers. In my video, I show you what happens as soon as I put a AT&T or T-Mobile SIM card in the phone. I immediately get an “Activation Required” message and the phone is unusable. The only SIM that did work in the phone was my Tracfone AT&T network nano SIM card. Since Tracfone owns Straight Talk this combo of SIMs seems to work.

Finally, Total Wireless is similar to Straight Talk. Both are brands owned by Tracfone. The company must save a little money buy sharing SIM Cards and the pouch attached to the back of the phone. Note that Straight Talk and Total Wireles are similar but offer different priced plans. Choose the one that is right for you. Also, Total Wireless only uses the Verizon towers compared to Straight Talk which can use either the AT&T, Verizon, T-Mobile or Sprint towers.

Check out my video below.