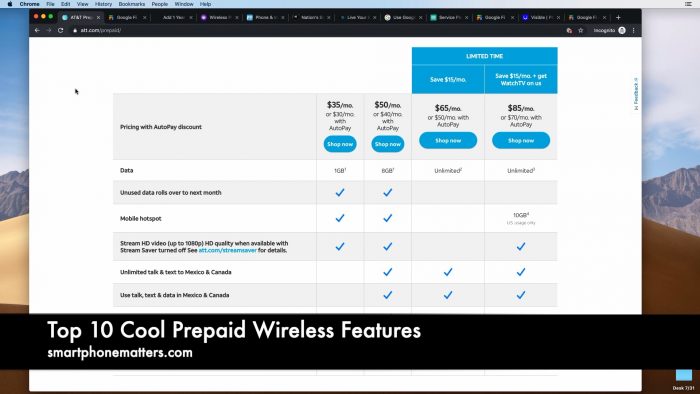 Today I thought I’d take a look at 10 cool prepaid wireless features. I’ve discussed a number of prepaid wireless plans here on smartphonematters.com and over on my YouTube channel so today I decided to do a top ten list of 10 features that I think are pretty cool. Note that the list below isn’t in a particular order so number 10 isn’t the worse and number 1 the best.

One really cool feature is to be able to use calling and texts to and from Mexico as well as use talk and text while in Mexico. AT&T Prepaid includes this feature on a few of their prepaid plans including using your cellular data. You can also add calling from Mexico and Canada to plans that don’t include it for an additional per use fee. The US shares large borders with Mexico and Canada so it makes sense that many people that live in the US would want to call and text to Mexico and Canada as well as use their phones while visiting those two countries. While this isn’t a feature I need I know a number of my readers love this feature.

While prepaid wireless is a great choice for nationwide service inside the United States, sometimes you’ll need service outside the US so you need International Roaming. Google Fi has excellent support for International roaming. You can use your phone with Fi service in over two hundred countries with your own phone number. Best of all you’ll pay the same rate for data abroad as you do in the US. Fi also include international texting for free as well. Keep in mind that Fi does charge 20 cents per minute for calling when roaming however, so If you plan on making a lot of calls the charges could add up. You should be able to avoid the per minute charges by using WiFi calling. however. I think a lot of people can get by with texts and data while traveling abroad.

I used Fi while visiting Hong Kong and mainland China a few years ago and it worked really well.

One of the things I like to see when reviewing prepaid service, are affordable options. One of my favorites in $50 for one year of service from Tracfone. With Tracfone, you add one year of service days to your account for $50, or about $4.16 per month. Note that this does not include any talk, text or data. It’s an ad-0n you buy when you purchase another plan.

This is a great way to keep a phone active for one year with a real mobile phone number, and you can add inexpensive plans with minutes, texts, and data as needed. Spend your money on active service rather than minutes, text, and data that propetually roll over. This add on is also a great way for many treacfone customers to keep their phone active and use up thousands of accumulated minutes they have purchased over the years.

The only downside of this add-on is that tracfone has recently removed the option for people using BYOP plans, but for now customer that purchased their phones from Tracfone report they still have the option.

Some people have modest needs or limited funds available for cellular or phone service so its great that it’s possible to get free calling. Both TextNow and Freedom Pop have free calling options.
TextNow offers free phone service using WiFi only and their TextNow app for iPhone and Android. The app is ad-supported but the calls and texts are free. Keep in mind you’ll need to be on Wi-Fi to use it as the free option does not include cellular service.

Freedom Pop also offers free calling, texts, and data using their app available for both iPhone and Android. With Freedom Pops Free Basic, you get 200 minutes, 200 text messages, and 500mb of data for free using AT&T cellular network. FreedomPop also has free FreedomPop to FreedomPop phone calling so you can call anyone else on FreedomPop without paying for minutes! This also works over the cellular network.

The US is a big place and not every cellular network is going to have coverage in all areas. Straight Talk and Net10 solve this by offering service on either the AT&T, Verizon, Sprint, or T-Mobile networks. When you sign up your phone will use one of these networks, This is a great feature for customers that want to bring their own phone from their previous carrier. In most cases that phone is from AT&T, Verizon, Sprint, or TMobile and can be used on the same network with Straight Talk or Net10. This means your phone is compatible and you’ll have coverage when you switch to Net10 or Straight Talk.

In addition to your smartphone, sometimes you want to use cellular data with your laptop or other device. Normally this involves separate plans or additional fees but with Google Fi Data-Only SIM cards it couldn’t be easily. Simply order a separate data-only SIM card for your laptop, tablet, or even a second phone and the data you use with that device will be charged to your phone bill. You pay for the data you use, you’ll see it on your bill but there are no separate charges to keep the device active. Don’t use any data with that additional device and you don’t pay anything.

I love to see prepaid wireless companies offer add-on high speed data. Often when you are on a fixed plan you may use up your high speed data. The option to buy more is a great feature. Total Wireless nailed this one with their $10 5GB Data add-on. That’s $2 per GB and incredible price for add-on data. But it gets better, this data does not expire as long as your phone is active.

Not only that, Total Wireless has an $25 plan with talk and text. So you could opt for that plan and buy data add-ons to use as much or as little as needed. $35 gets you a month of talk and text and 5GB of data that will roll over compared to their $35 plans with talk, text, and 5GB of data where the data expires at the end of the month. Oh, and Total Wireless uses the Verizon network as well.

One of the coolest features I’ve seen is Google Fi’s Pause. With Pause you can freeze your service for up to three months. You won’t have service but you won’t have to pay your bill either. After three months you service resumes, but you can immediately pause it again. This is a great way to keep your Fi phone plan if you only occasionally use it.If you occasionally travel outside the US this is a great way to keep a second Fi number available for international use. Note that you can only pause your service once per billing cycle.

Mobile hotspot is one of the most in demand features as people want to share their cellular data with their laptop, tablet, or other Wi-Fi devices. Visible networks offers unlimited talk, text, and data using the Verizon network for $40 per month. Not only that, but they included unlimited mobile hotspot. The hotspot does have a maximum speed of 5Mbps and you can only use it with one device at a time but its unlimited. Most other plans that offer unlimited data either restrict the use of hotspot all together or only include a fixed amount of high speed data for hotspot.

Note this isn’t “roaming” service, they really use all three of these networks when needed. Of course the reason Fi did this is because they use the third, fourth, and fifth largest cellular networks, not the first and second. A service that could switch between the AT&T and Verizon networks would be really cool. I’d like to see that!