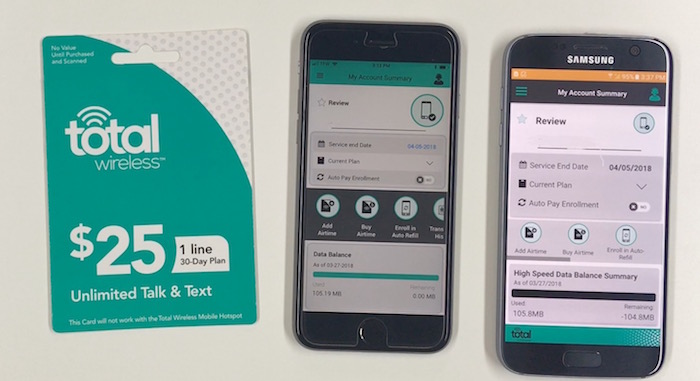 I signed up for Total Wireless in January 2018 to review their prepaid wireless service. It’s already April 2018 and I am long overdue with this review so I decided to start with a summary and share my thoughts and conclusions. I’ll follow up later with more details in a follow up article.

For my review I signed up for Total Wireless’ $25 single-individual line plan with unlimited talk and text. This plan does not include any high speed data. Total Wireless offers a 5GB data add-on for $10. This data carries over and does not expire for as long as you keep your phone active. I decided to try the add-on data for my review. This add-on data feature is great, at $10 for 5GB that averages out to $2 per GB. That is the best deal in add-on data I have seen and this data never expires.

If you want to learn more about the latest Total Wireless Plans and features, see my latest YouTube video below. Note I am writing this article in April 2018 but I update the video as the plans, features, and prices change. See Total Wireless Latest Plans And Features

I signed up for the Total Wireless $25 plan and took advantage of their Bring Your Own Phone (BYOP) option. I signed up using my Samsung Galaxy S7 but also tried the service by moving the SIM into my iPhone 6s. You’ll need to check that your phone is compatible / eligible for the BYOP plan on totalwireless.com. I’ll add a link here to show you how to do this.
Before I signed up I bought a Total Wireless BYOP SIM Kit and a $25 Plan card. You can order these online or buy them from a retailer like Best Buy or Target.

My Samsung Galaxy S7 is the Verizon model SM-G930V and currently is using Android 6.0.1. My iPhone 6s is the A1633 model that I bought from Apple SIM-free and unlocked. During the time of this review I update the phone from iOS 10 to iOS 11. (I currently need to keep my Galaxy S7 using Android 6 for a project I am doing so I haven’t updated it.)

I signed up online at totalwireless.com. I opted to get a new phone number but you’ll also have the option to transfer your current or existing phone number to Total Wireless. The signup process was quick and I didn’t have any issues. If you decide th transfer your number you’ll need some additional information from your current carrier and the transfer could take up to 48 hours.

After I signed up I put the SIM in my Samsung Galaxy S7. Setup was simple, I needed to change the APN value in settings. Once I did this my phone was ready to go. My iPhone 6s did not require any setup. When I inserted the SIM the phone automatically set up the APN.

Whenever I review a prepaid wireless service, I check that the basic features are working immediately.

I was able to make and receive phone calls on both the Galaxy S7 and my iPhone 6s. I tried calling several home and mobile phone numbers. The calls were clear. I had no dropped calls and no problems connecting.

I was also able to send and receive text messages on my Galaxy S7 and my iPhone 6s without issue.

Finally, I was able to use cellular data to connect to the Internet with both the Samsung Galaxy S7 and iPhone 6s. I’ll discuss cellular data more later.

I also checked to see if I could see could use a number of advanced 4G LTE features with either phone. Most did not work.

Wi-Fi Calling did not work on either Galaxy S7 or iPhone 6s. The option to turn on Wi-Fi calling was missing from the settings. I checked Wi-Fi calling on both phones with a Verizon postpaid SIM and it did work.

Personal Hotspot & Portable Hotspot did not work with either the Galaxy S7 or iPhone 6s. I tried to enable it in the settings. Both phones gave error messages.

I also tried to see if I could tell if HD Voice worked. I could not hear the difference in call quality. My Galaxy S7 showed an HD indicator for all calls made. The iPhone has no such indicator.

Voice and Data at the same time

I was able to use simultaneous voice and data on both my Galaxy S7 and iPhone 6s. I was had an LTE data connection and was able to use Chrome and Safari to read the web while on a phone call.

I wanted to tell you a little bit more about cellular data. I found the 4G LTE data speeds to be as fast as Verizon Wireless Postpaid. I did not observe a max download speed. Verizon used to impose a 5Mbps max download speed on all prepaid services that used their network. That is no longer the case. I found the speeds to be similar to Verizon Wireless postpaid. Verizon’s 4G LTE network isn’t that fast in my area. I did a video comparison of the speeds back in January 2018. You can see that here.

I used up most of that 1.5GB of data watching YouTube. Perhaps I’ll try a movie on Netflix and see how much data I can use.

I would have liked to try the add-on data for the review but that would be like signing up for basic cable, finding out you have free HBO, and then ordering HBO anyway.

In conclusion, I like and recommend Total Wireless for anyone that wants prepaid service in an area were Verizon has the best or is the only network with coverage. I think the $25 plan I signed up for along with the add-on data that averages $2 per GB is an amazing deal. For me that is a better option than their $35 5GB plan where the data expires every month. The family-shared plans are a good deal if you need two, three, or four lines too.

On the downside, Total Wireless doesn’t offer an unlimited plan. Straight Talk’s $55 unlimited plan on the Verizion towers may be an alternative. Also Total Wireless is missing many of the advanced features that Verizon postpaid offers. And many of those features are available on Verizon prepaid for less money than Verizon postpaid but still more expensive than Total Wireless. Finally I want to point out that Verizon prepaid had recently added a $30 plan with 500MB of data which may also be an attractive option for some as well.