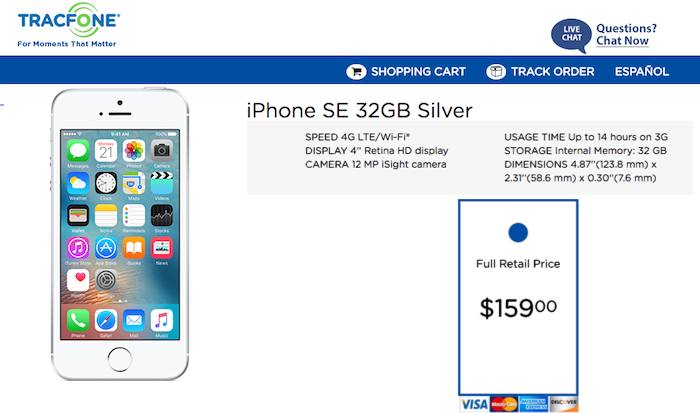 Tracfone is currently selling Apple’s iPhone SE for $159. You can order one directly from tracfone.com. This is great news because I hear from so many current and potential Tracfone customers that to buy an iPhone to use with Tracfone service. Now this offer is available until November 26 2017 and supplies are limited so if the sell out it may be a while before you can buy an iPhone directly from tracfone.com


Shop for the latest iPhone SE deals on tracfone.com

The iPhone SE is a great choice for tracfone. Apple sells this same phone SIM-Free and unlocked for $349. So tracfone is selling the phone for $190 less than Apple. Keep in mind though that the $159 Tracfone iPhone SE is locked for use with Tracfone service, so don’t expect to buy this phone and use it with another wireless service.

While the iPhone SE comes in two different storage sizes and three different colors, Tracfone is currently only has the 32GB storage model in Silver, the Space Grey, and Rose Gold colors are not available. One of the major differences between the iPhone SE and the iPhone 5s is the rear-facing iSight camera. The iPhone SE has a 12 Megapixel camera compared to the iPhone 5s’ 8MP camera. In addition to taking better photos, the iPhone SE’s camera supports 4K video (30fps) and better slow motion video at 1080p and 720p.

While both the iPhone SE and iPhone 5s have touch-Id finger print sensors, the iPhone SE supports Apple Pay, Apple’s contactless payment system. I use Apple Pay all the time and I love it. Most of the stores, I shop at accept it now. Next, note that when you add the phone to your cart, you’ll have the option to buy the phone with or without a service plan. If you are already a tracfone customer you’ll se able to transfer your service to the the phone. If you are a current customer, make sure you know wheter you are currently using the AT&T, Verizon, or T-Mobile towers. If you are happy with your current service, you don’t want to be suprised if you change towers with the new phone.

Finally, I’d also mention that the other tracfone brands also have the iPhone SE in stock as well. So if you are looking for new service or an existing Straight Talk, Total Wireless, or Simple Mobile customer you can also get a great price on the iPhone SE as well.

$10 off iPhone SE with purchase of $50 service plan

Be sure to check out my video below.