My husband and I both have Verizon unlocked iphone 6s plus phones and were told by Straight Talk last year our phones are not eligible for BYOP on the Verizon network in our area which is laughable because older Verizon Galaxy’s are on the local Verizon network on ST no problem. We took our Verizon model unlocked phones to PagePlus for guaranteed Verizon service.

New issue I am looking to buy my son an iPhone 6s plus as a present. He is currently on the Straight Talk network with a Galaxy. There is no clear way to know which phone will or will not work on their BYOP until you have that IMEI in your hands and the eligible phones section on ST is vague to say the least. Also the check compatibility feature does not work with Firefox at all. I don’t have alot of faith in ST at the moment because they seem to force you to use an ATT iphone to be on their network. And their website is often unreliable. I don’t want to do that. I prefer a truly unlocked model Apple offered or a Verizon model phone. I guess ST doesn’t want us as customers or my son as a continued customer.

Hi KM,
I understand that this is a frustrating experience, and I wish that Straight Talk would improve the experience. Unfortunately, the fact is that all prepaid wireless companies that use the Verizon or Sprint network need to check the MEID number of the phone to make sure it can be registered on their network before activating it. This is required because Verizon and Sprint both use CDMA network technology.

The fact that Straight Talk doesn’t state clearly what the eligibility criteria and just says your phone is compatible or not also confuses consumers too. It seems obvious to most people that a Verizon phone is “compatible” with the Verizon network so it seems to make no sense.

You are also right that it not possible to figure out which which network a Straight Talk phone uses by looking at straighttalk.com. And sometimes they use different networks depending on your location or the specific deal they are offering at that time so you need to contact support and ask.

I also agree with you that the straighttalk.com isn’t always a reliable way to determine if a phone is “compatible”.  Sometimes it requires a call or online chat with Straight Talk to know.  And, the fact that you could use your iPhone’s with Page Plus, which is also owned by the same company as Straight Talk makes it more confusing.

It is possible to find out the MEID of an iPhone before buying though depending on where you buy the phone from and you do need to make sure understand the return policy.

Straight Talk offers service on all four major networks because they want to reach as many consumers as possible, so I don’t think they want to force people to the AT&T network.

Now, I wanted to tell you that if I needed to be on the Verizon network at this time Straight Talk (or PagePlus) wouldn’t be my first choice. If are heavy data users, I’d consider Verizon prepaid. The cost is very close but its a better experience, the data speeds are way faster, and you get HD voice features like voice and data at the same time as well as Visual Voice Mail. And if you were looking to spend less per month, Total Wireless, which is also owned by tracfone has some very affordable plans, including shared plans.  I have found that most Verizon phones, and now even unlocked phones are eligible for Verizon prepaid.  And, you can be certain that any phone you buy from either of these two companies uses the Verizon network.

Signing Up For Verizon Prepaid Wireless

Many smartphonematters readers have made the switch to Straight Talk Wireless' Verizon network and are happy with ... 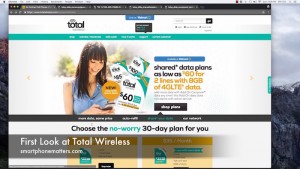 Update #1 - Oct 17 2016 I wanted to share with you some reader and First, on smartphonemattters.com, a reader Jason, shares that he and his wife signed up for the Back over...