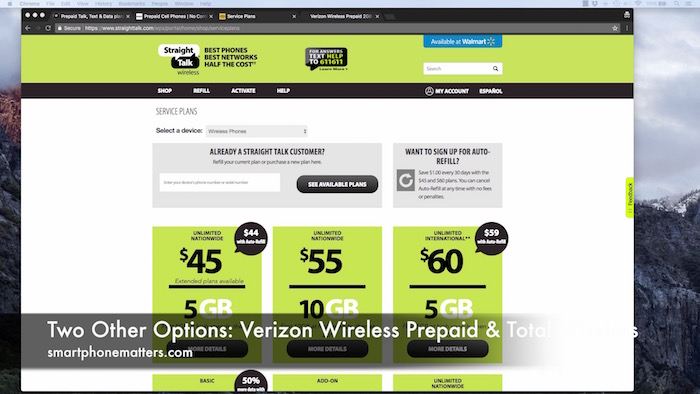 In the past two weeks, I have had over a half-dozen questions and comments about Straight Talk’s Verizon network.  Some have asked me about what they need to do to sign up. Others wanted to know if their phone is compatible,  and one question was even about the network speeds.

Now while I try and do my best to answer people’s questions, I also want to tell people that their are other prepaid wireless options for the Verizon network that they should also consider.

Verizon offers a number of advanced LTE network features that StraightTalk doesn’t have. If you have a compatible phone you can take advantage of HD voice which has better sounding calls, supports Wi-Fi calling and voice and data at the same time.

Verizon also supports Visual Voicemail on the iPhone. Now it does also work for some people, but not others using Straight Talk.

I have a whole series of articles and videos explaining Verizon Wireless Prepaid on smartphonematters.com and my YouTube channel so check that out.

Now I haven’t tried Total Wireless myself. But I have tried Straight Talk’s and tracfone’s Verizon network service and because they are all owned by the same company the service should be pretty similar. And again, I have a bunch of articles and videos describing Total Wireless on smartphonematters.com and my YouTube channel.

All right I think that’s it. Now the next time someone asks about Straight Talk’s Verizon network, I can just refer them to this article. I hope this helps.

If you use the affiliate link below when you sign up for Verizon Wireless or Prepaid or Total Wireless you’ll be helping to support smartphonematters.com at no additional cost to you.

Verizon Prepaid, now with Always on data. Stay connected even after you have used your high speed data.