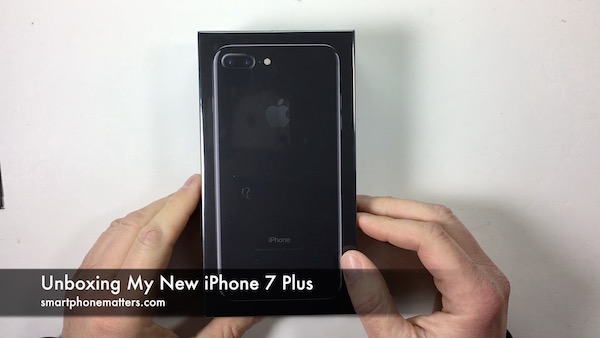 I picked up a new iPhone 7 Plus this week so I thought I’d do an unboxing video. The iPhone 7 was announced in September 2016 so it’s a little late for an unboxing video. I typically wait for Apple to release the SIM-Free model iPhone before buying, and I always wait until I can buy one in the Apple Store in New Hampshire.

I bought the 256 GB Jet Black iPhone 7 Plus. I knew I wanted a black phone but I had to decide between the Black and Jet Black. The black is a matte color and feels pretty similar to the iPhone 6s. The Jet Black is a high gloss black, and has a grippy feel. I’ve been told the Jet Black model will scratch easily. I decided on the Jet Black one. Alright enough about the color.

Inside the box, was the iPhone 7 Plus, an Apple 5W USB Power Adapter, a Lightning to USB Cable for charging and syncing, EarPods with Lightning Connector, and a Lightning to 3.5 mm Headphone Jack Adapter. Also included in the box was the documentation, white Apple stickers, and a SIM tray ejection tool. I always leave all the accessories in the box new and unused so if I decide to sell the phone later or pass it along to a family member it has all the accessories. I have extra cables, chargers, and headphones so I don’t need to use them anyway.

With the new iPhone 7 Plus, I’ve decided to to try out the larger 5.5 inch iPhone. I’m currently using an iPhone 6s and so I guess I’m going to find out if I’d like the larger phone. As always, I’m looking forward to trying out the new camera, I am particularly interested in the improved low light. Another reason to get the 7 Plus was because of the dual rear camera that includes both wide and 2x optical zoom lenses. I bought the 256 GB model. I shoot a lot of video. I shoot all my YouTube videos on my iPhone, so I like to have plenty of space.

I plan on using a regular headset with the adapter. I think using the adapter is going to be a pain but I’ll give it a try.