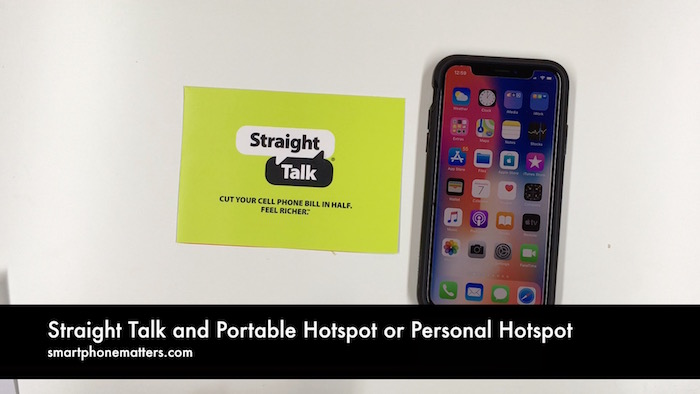 This article is about Straight Talk Wireless and Mobile Hotspot or Personal Hotspot. I’ll explain to you a few things about Straight Talk and hotspot, but this article isn’t going to tell you how to fix your hotspot if its doesn’t work or if it stopped working. I don’t know how to make your hotspot work, and my advice is if you want reliable hotspot consider changing prepaid wireless companies.

Now, with that is of the way, I share with you what I know about Straight Talk and hotspot which may explains some things that helps you understand why so many people had problems with it.

First, as of the maybe October 2019, Straight Talk has added a fixed 10GB of mobile hotspot data to their $55 unlimited plan. According to straighttalk.com only the $55 plan includes hotspot, none of the other plans include hotspot. Additionally, customers using the $55 plan with Straight Talk’s AT&T compatible SIM and not authorized to use hotspot.

Now in October 2019, some customers that had been using 100s of GB of hotspot found suddenly had their hotspot stop working after they used the recently added 10GB of hotspot.

For some reason, I hear from a number of people telling me that I was wrong about Straight Talk not including hotspot with their plans. I can only go by what was written on straighttalk.com. See the details below.

See the fine print on the page below, before you purchase a phone… (click the image to enlarge) 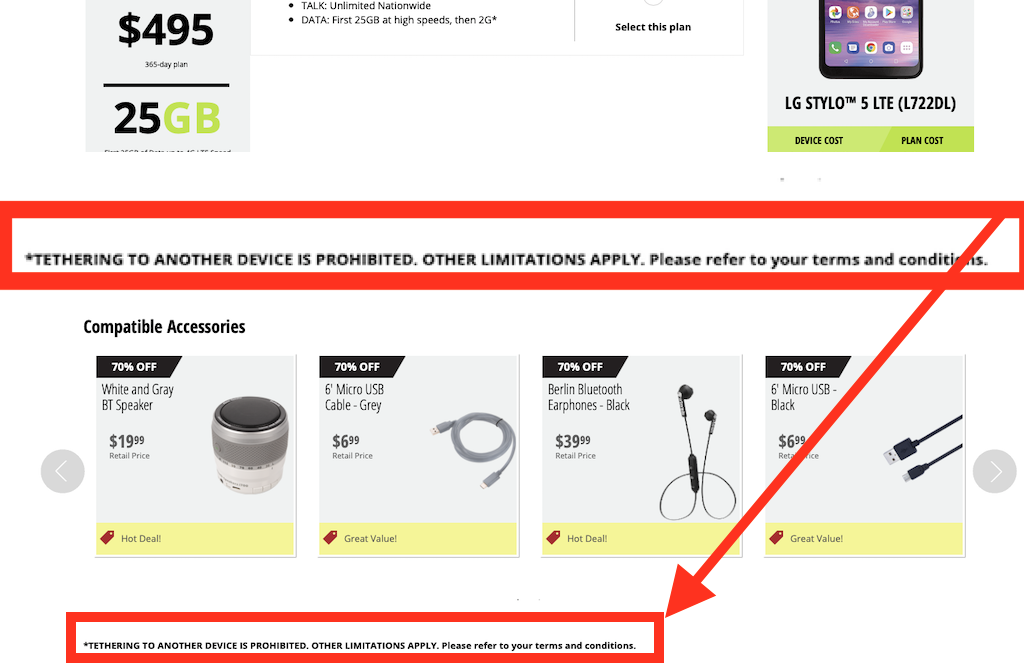 It’s also stated in the terms and conditions of service, section 7. (To me, this was obviously written by lawyers), Click the image to zoom in.

What is really confusing is that some Straight Talk customers are able to turn on and use hotspot on their phones. Not all Straight Talk customers, but some. Because hotspot works in these cases, many of these customers are not aware that the feature isn’t included as part of their plan. Recently many customers are reporting that their hotspot suddenly stop working. Others report receiving warnings to stop using hotspot, some have their data services temporarily suspended, and it some cases customers have their service terminated. When your hotspot stops working, you see this as a problem you want to fix, Straight Talk sees it as a problem that they have now fixed.

Hotspot Works for Some Customers, But Not Everyone

As I said some Straight Talk customers are able to turn on and use hotspot while others are not. In my experience Straight Talk customers that have Android phones and use Straight Talk’s Verizon towers are the ones most likely to be able to use hotspot. This is the only combination that ever worked for me. When you sign up for Straight Talk, your phone might be using Straight Talk’s AT&T, Verizon, T-Mobile, or Sprint towers. Also you might be using an iPhone or and Android phone, you may have bought a phone from Straight Talk or are using your now phone. so there are a manyf possible combinations that would need to be checked. I tried the four combinations of iPhone, Android, AT&T and Verizon towers, only Verizon and Android worked for me. Your experience may be different, consider leaving a reply below and share what did and did not work for you.

Here is My Advice If You Want or Need Hotspot

So you may be wondering what can you do. My advice is that you want hotspot, choose a wireless provider that includes the feature as part of their plans, or offers it as an add-on feature. I’d also recommend that you let Straight Talk know that you changed carriers because they do not have the feature and you’d like to see them offer it. While you are free to communicate as you see fit, I’d recommend you do this politely over social media. Based on the comments I have received here and on YouTube I know many people are angry and upset about losing hotspot or not being able to use it at all. My opinion that if you switch to their competitors and let them know why they may re-evalulate adding the feature to their plans. I wrote another article about prepaid wireless and hotspot, check out Prepaid Wireless and Portable or Personal Hotspotto learn about your options.

Should You Use Your Hotspot If It Works..

Many people ask me if they should use their hotspot if it works. Others are adamant that they will use hotspot for as long as it works. The choice is up to you and hopefully you can make an informed decision after reading this article. Just know that if you rely on having hotspot, it may eventually end up disabled. You may be warned, suspended, or terminated. If your hotspot doesn’t work, Straight Talk’s customer service will not assist you. When I tell some people that it violates the Straight Talk’s terms of service agreement, they assume I am implying they will be sued or arrested, it’s not the case. You a violating the terms of a business agreement, not criminal law. I’ll add the usual, “I am not a lawyer” disclaimer here.

For the remainder of the article I want to share some additional information. Note that is 2019, I do not use Straight Talk personally. Straight Talk’s plans offer a large amount of fixed or high speed data at competitive prices, but I only need a limited amount of data so it’s no longer the right choice for me.

Straight Talk has not told us why they do not include hotspot with their plans. It’s my opinion that is is a business decision on their part. We don’t know the terms of their business arrangements with AT&T, Verizon, Sprint and T-Mobile and those companies might contractually prohibit its use. It’s possible they need to pay for all the data their customers use, and when customers use more data with hotspot, those customers become unprofitable, and operate at a loss.

Most prepaid wireless companies that do offer hotspot only allow for a fixed amount of high speed data usage with hotpsot (5GB, 10GB, 15GB, for example). I regularly hear from Straight Talk customers using >100GB of data per month, using their hotspot to replace home broadband connections. Many people use it for gaming, which often requires huge downloads. Other customers tell me they live in rural areas without many options for broadband services at home, so they use Straight Talk with hotspot.

In addition to the costs of providing “unlimited” hotspot, there is also a performance impact on the cellular network. My understanding is that each cell in a 4G LTE network can only handle a relatively small number of devices. The 4G LTE network isn’t set up for offering home broadband connections and using it that way impacts the performance of the network. Again, this is my understanding base on what I’ve read online, I do not have a background in wireless telecommunications.

I’m not aware of any company that offers unlimited high speed 4G LTE data with hotspot. If it were a profitable business, I’d expect we would see it offered.

Also, a number of people believe that Straight Talk is “ripping them off” by not including hotspot and believe because they paid for a plan they are entitled to hotspot. I understand that many people feel this way, but it isn’t how this works. Straight Talk offers the plans and when you sign up you agree to their terms and conditions of service. You agree and pay, or you don’t sign up. This angers some people, but I wish consumers would realize the amount of power you have as the paying customer. They want your money. When enough people take their business elsewhere, they will get the message. You have the money, they want it. Exercise your power as the consumer.

While I am not aware of it, it is entirely possible that Straight Talk’s terms and conditions of service do violate FCC regulations or even consumer protection laws. Even if this is true, what recourse does the average consumer have? I suppose you could start a class-action law suit, and if successful, Straight Talk customers would have access to hotspot and may receive a few dollars each in compensation. The law firm handling the case would take 30% to 50% of the settlement off the top, then the bills and expenses paid, and whatever remains is divided among the plantiffs. That is my limited understanding of class action law suits. To me, it isn’t worth my time or effort, but you may feel differently.

If you made it this far, I’m impressed. I hope that if hotspot is important to you, you choose a prepaid service that includes it. Let Straight Talk know why you left. I know many of you are rightfully annoyed that it wasn’t clear to you that hotspot was not part of your plan. You probabally signed up for prepaid wireless to save a few dollars compared to post-paid service. Rather than spending time being angry, focus you energy on finding the carrier that is right for you and get back to the rest of your life. At least that is my take on all this.

I discuss some of these points in this older YouTube video but this article is newer and more up to date.