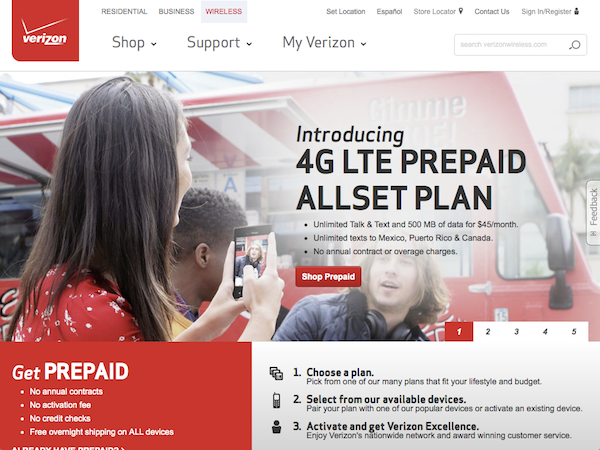 I found out yesterday that Verizon Wireless is now offering a 4G LTE prepaid plan. It’s called the Verizon 4G LTE Prepaid Allset Plan. This is big news, and let me tell you why.

If you have a Verizon smartphone that you want to use with a prepaid wireless plan but want 4G LTE and to be on the verizon network, you now have an option.

So for example, many BYOP Straight Talk customers are using the Verizon iPhone 5 with Straight Talk’s ATT SIM. That phone only gets 4G HPSA+ on the Straight Talk ATT network. If they opted for Verizon’s new plan, they can get 4G LTE. Also many smartphonematters readers have told me that the Verizon network is the only network with adequate coverage in their area.

I haven’t tried the plan yet or verified which Verizon smartphones are eligible yet. According the the web site. You’ll get unlimited talk, text and 500MB of data for $45 a month. If you sign up for auto pay, you’ll get double the data, 1GB of data a month. They also offer a feature called Bridge data where you can by an extra 500MB, 1GB, or 3GB od data for $5, $10, or $20 respectively. The Allset plan offers less data than Straight Talk’s $45 unlimited plan which offers 3GB of 4G LTE data on it’s att and tmobile networks. But if you don’t use that much data, want LTE and to be on the Verizon LTE network the Allset plan mightbe right for you.

Many of us tracking the prepaid wireless business have been waiting for Verizon to open its very fast 4G LTE network to prepaid customers. Right now, only Verizon’s own prepaid service is offering 4G LTE. None of the MVNO prepaid wireless companies that use the Verizon network are offering 4G LTE yet. So for example, if you are using Straight Talk, Net10, or PagePlus you won’t be getting LTE yet. I assume that in the long term you will because in the future it will be more cost effective for Verizon to run more and more of its business on their LTE network.

Thanks to a reader, Grant for alerting me to this. We were discusssing his options to get prepaid 4G LTE on his iPhone 5 and he alerted me the fact that Verizon just started offering the Allset Plan within the last month.