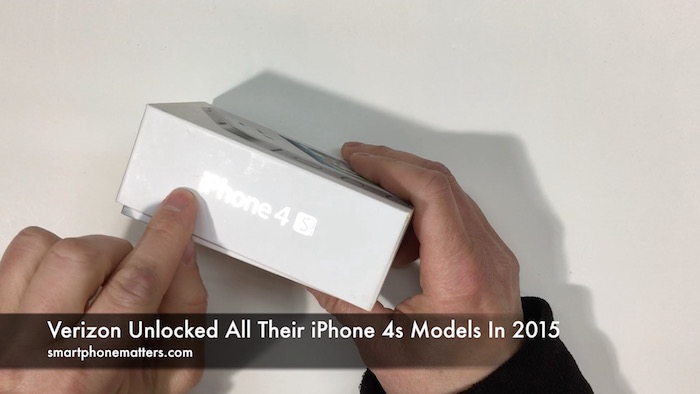 In 2014 I published one of my most popular articles and videos titled Use and iPhone for $7 a Month. In that video I took a used Verizon iPhone 4s and signed up for Tracfone Bring Your Own Smartphone Plan and showed you how you can use the iPhone about $6.67 per month.

Recently I got that iPhone 4s back after the owner upgraded to an iPhone 5s. Back in August 2014, tracfone only offered their Bring Your Own Smartphone plan for their Verizon CDMA network. The plan didn’t support LTE or their AT&T GSM network.

Now that I got this iPhone back, I’m not sure what I am going to do with it. I had heard that in early 2015, Verizon bulk unlocked all these iPhones so that they can be used in the US with GSM networks. This Verizon iPhone 4s is the same model that was used on the AT&T network, so it does support GSM, but Verizon had locked the phone and refused to unlock them for customers in the past. I decided to see if the phone is really unlocked

I removed the Verizon micro SIM card, yes this phone has a Verizon SIM. Today Verizon phones have a SIM to support 4G LTE networks but back than the SIM card was only used so that these phones could roam to GSM networks domestically and internationally.

I’m tried FreedomPop AT&T 4G LTE SIM card in the phone and it worked. The iPhone 4s doesn’t support 4G LTE, so the phone only gets a HSPA connection and shows a 4G in the status bar.

When I put the FreedomPop SIM card in the phone, it installed a new carrier update for the AT&T network. After that I needed to install FreedomPop’s APN Carrier Setting Profile to set up the APN for data use.

Now FreedomPop is a little different than normal service, the SIM only supports data, not calls and text messages. To use calls and texts you need to use the FreedomPop app. Once I set up the APN I was able to turn off Wi-Fi, and browse the web using cellular data.

In 2017, the iPhone 4s is definitely past its time. The phone doesn’t support 4G LTE and only support iOS 9. I wouldn’t recommend buying one of these phones to use with an unlimited plan, but if you already have one they make an nice extra phone for free service like FreedomPop offers or a low cost Tracfone plan.

My first iPhone was an iPhone 4s. I always liked that phone. While a little on the heavy side, I really liked the design of the phone. I liked the way it felt in my hand, will respect to Mr. Carter there. This phone had a nice 8MP camera back then and it is still good enough for some basic snapshots.